The data we provide in the 2016 National Housing Construction Index focuses on levels of new applications lodged and actual project commencements for every county in the Republic of Ireland.  Data is provided for large Residential Developments, Self-Build schemes as well as Domestic extensions and alterations

Housing Construction sector, is there a recovery, and if so, is it enough?

Anecdotal evidence suggests a broad recovery in the residential construction sector, however is it unclear where the recovery is, what is its magnitude and is it sustainable? New figures soon to be released from www.buildinginfo.com shed some light on the specifics of this recovery and point to some answers.

There are three aspects to the residential construction sector 1. The home improvement/extension sector 2. The self build “one –off” sector and 3. The residential development sector.

The home improvement/extension sector is not defined by geographic or demographic factors and is a useful indicator of broad economic activity. Figures show that the number of extension type projects that started  in 2015 was circa 5,100,  an increase of 3%  and 10% respectively when compared to 2014 and 2013. However this number only measures projects that required planning permission (i.e. greater than 40 sq mtr) so it would fair to assume it represents only the tip of the home improvement iceberg and that the real volume of activity in this  sector would be a multiple of that figure.

The one-of house sector which accounts for approx. 3,000 units a year is largely, but not exclusively, a rural phenomenon. One-off houses made up almost half of the entire housing units commenced in the Connacht/Ulster region in 2015, for example. This sector underwent some turbulent times recently with the introduction of the new building regulations in March 2014. Initially there was a surge of commencements in early 2014 followed by a fallow period for the remainder of that year as the impact of the regulations hit home. Overall commencements  for 2014 were up 35% on 2013. This level of growth was obviously unsustainable and this is evident in the fact that 2015 numbers were down 9% when compared to 2014. There has been a subsequent roll-back on the building regulations with regard to one-off house whereby the owner/builder can elect to opt-out. The impact of this change has yet to be fully seen.  On the positive side if compared to 2013, 2015 shows healthy 22% increase. Planning applications for one-off houses are up 20% year on year  2014 vs 2015 to almost 7,000 this is the highest figure in some years. 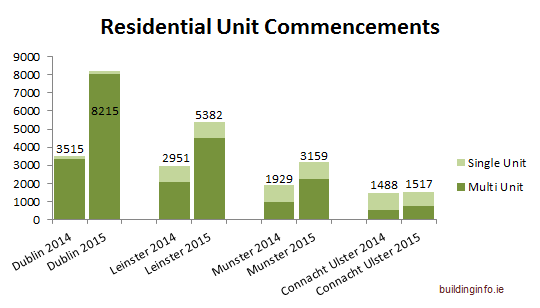 Exclusive research undertaken by Building Information Ireland shows that residential development projects with a total unit count of 15,500 started in 2015. This is an increase of 126% on 2014. The regional breakdown shows that over half of these are in Dublin and 30% in the rest of Leinster. Typically these are multiphase developments and will not be completed in one year. Although 2015 has been by far the strongest year since 2008 it falls significantly short of the 25,000 units per year required as suggested by recent ESRI reports. Further analysis shows that the lead time from submission of application for a residential development to actual commencement is 121 weeks. This suggests that permissions are in place for developments but the climate to start is not quite there yet. Fresh thinking will be required to break the impasse  and square the circle of consumer demand, build price and available credit to potential homebuyers.

Overall the metrics are all pointing in the right direction and recoveries of varying sorts are underway depending on location and we hope it is sustainable.  Full analysis of the construction industry by sector available from www.buildinginfo.com.

In an article from the Sunday Business Post, dated 31st January 2016, Tina-Marie O’Neill takes a look at the current state of play in the Residential Building Sector.  Her highly informative article sources statistics and data from the Building Information Index and CEO Danny O’Shea shines a positive light on improvements being observed through the index.

Not so quiet on the new homes front

It is encouraging to see a flurry of new homes schemes either on the market or preparing to launch in the greater Dublin area at this early stage of the year. With average rents in Dublin just shy of the 2007 peak rental figures, an increase in new homes on the market will certainly help alleviate the housing shortage. Despite the positive upswing, a recent forecast report from the Society of Chartered Surveyors Ireland put the annual number of homes needed in Dublin at 7,000 and currently the figures fall well short of that. By the end of 2015, just 2,735 homes had received planning permission, prompting the SCSI to argue that the lack of supply continues to put pressure on the “dysfunctional” property market. It also criticised a lack of planning staff in local authorities which translated into long delays on badly needed projects. A small ray of light on that front came from Danny O’Shea of the Building Industry Index. According to O’Shea, the residential sector is on a strong growth trajectory with applications up at the end of 2015 by 29 per cent on the previous year and – more importantly – commencements were up by 98 per cent. As well as that, the average lead-in time for projects to start is reducing. It is currently at about 132 weeks from application to commencement. “This lead-in time has stagnated the industry in recent years, but we have seen it reduce gradually throughout 2015. At the beginning of 2015, the duration stood at 141 weeks. This will continue to reduce throughout 2016, further improving the activity levels in the sector. All of this augers well for increased residential output into 2016 and beyond,” said O’Shea…. To read full article – Not so quiet on the new homes front – Sunday Business Post 31 1 2016

Published recently by the Society of Chartered Surveyors Ireland in conjunction with Future Analytics the Q3 Housing Developments Monitor, which examines housing developments in Co. Dublin of greater than 25 units, shows that in Q3 planning permission was granted for only 13 schemes.

Building Information Ireland are proud of our association with this highly informative report and our contribution to it. Details on all schemes referenced in the Q3 Housing Developments Monitor can be found on our website.

Register to our 10 day free trial to review.

In the article featured in today’s Sunday Business Post Michael Brennan and Fearghal O’Connor look at how Ireland’s labyrinthine planning system, rising rents and changing demographics are contributing to the housing crisis and investigate if these problems be fixed?

The article examines how in recent years, the building industry industry in Ireland was on its knees. However now, demand for housing is increasing rapidly, but supply is lacking? Right across Dublin there are sites with planning permission – sites where developers could build the homes needed to meet demand and solve the housing crisis. But the number of homes built in the capital in the first nine months of 2015 fell 14 per cent to 2,057. It raises the question: what is going wrong? The Sunday Business Post spoke to builders, housing experts and top officials in all four Dublin councils, to investigate the housing crisis. Data provided by planning information resource Building Information Ireland shows the scale of the challenge. Even when builders get planning permission, it still takes them more than three years to complete a home. But a soon-to-be-published third quarter study by Building Information Ireland suggests the situation may have improved in recent weeks. There were planning applications for 14,600 housing units in Dublin up to the end of last September, a 97 per cent increase on the previous period last year. According to Building Information Ireland chief executive Danny O’Shea, there were also 5,048 housing units under construction up to the end of last September, which was up 75 per cent from the same period in 2014. But this is still well short of the average of 7,000 to 8,000 new homes per year which the Housing Agency estimates is needed to meet demand in Dublin up to 2018.

In this interview with Highland Radio recorded earlier this week CEO Danny O’Shea discusses the latest figures from the National Housing Construction Index and reveals that sentiment in the Donegal construction sector in remains positive as planning applications rose by 35% in the first six months of 2015 when compared to same period in 2014.

However, Danny does point to the fact that despite the positive outlook, there has been a drop in activity in the housing construction sector in Donegal with project commencements down by 54% in the first half of this year but this is largely due to the change in regulations at the beginning of 2014 which resulted in an over inflation of commencements during that period.

…despite dramatic drop in Self Build Housing Construction

New data from the National Housing Construction Index illustrates that in the first 2 quarters of 2015 a fall in activity in the residential construction sector when compared to 2014 has been seen. The main factor for the drop is the reduction in Self Build housing construction commencements, which fell by over -40% year on year.

However, the medium term outlook for the housing construction sector is positive, with the latest edition of the National Housing Construction Index (NHCI) from Link2Plans showing that new housing planning applications increasing by+14% in the first six months of 2015 when compared to the same period in last year, but project commencements have fallen nationally by -26% year on year. 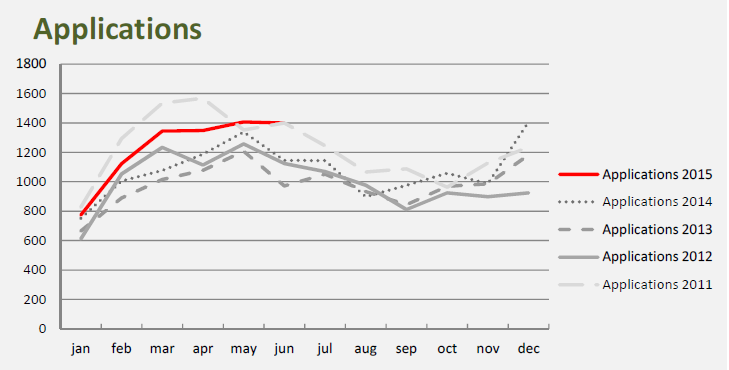 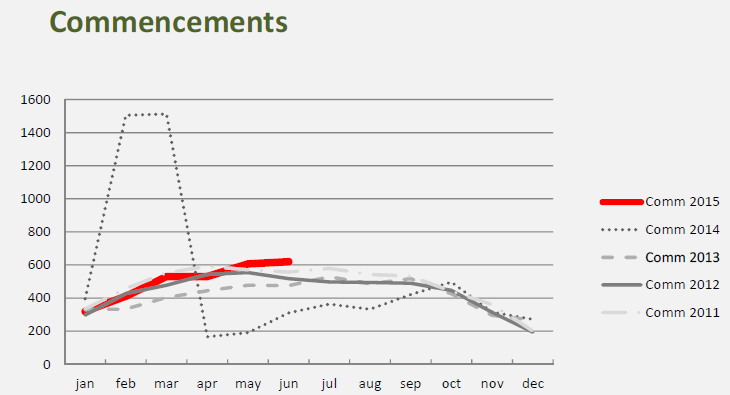 Below is an excellent article from Tina-Marie O’Neill that featured in The Sunday Business Post yesterday (06/09/15).  Danny O’Shea CEO of Building Information Ireland provides an insight into the Residential Construction pipeline with some of the findings from the latest edition of the Building Information Index.  Contributions from many of Ireland’s largest property consultants shed further light on the outlook for the Residential Housing sector. 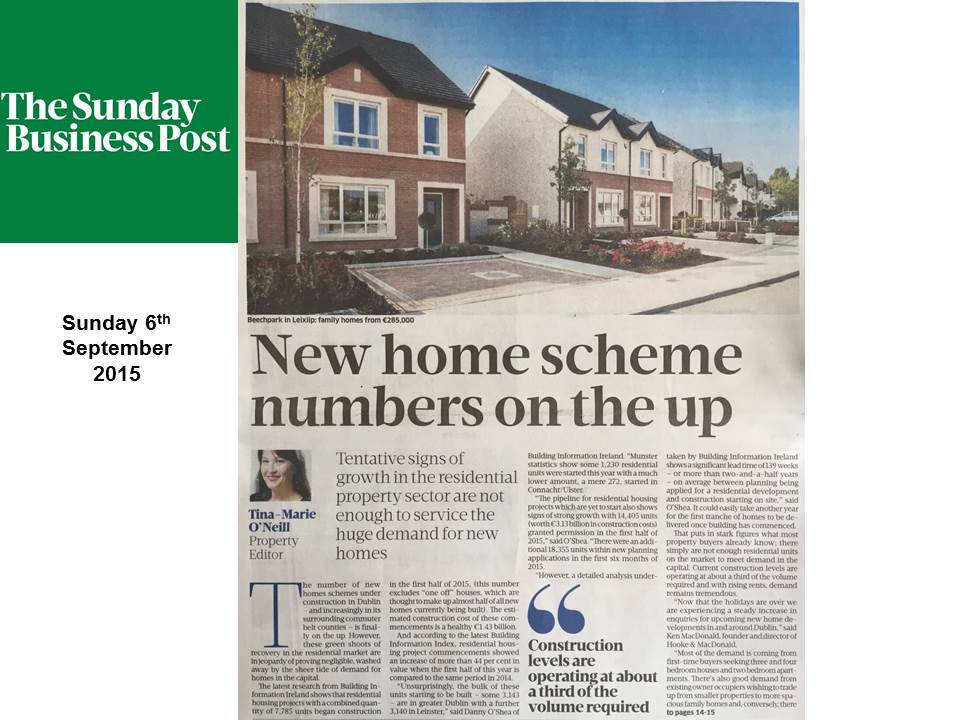 New home scheme numbers on the up