Almost 1,000 homes to be built on former Dundrum hospital grounds in SHD development 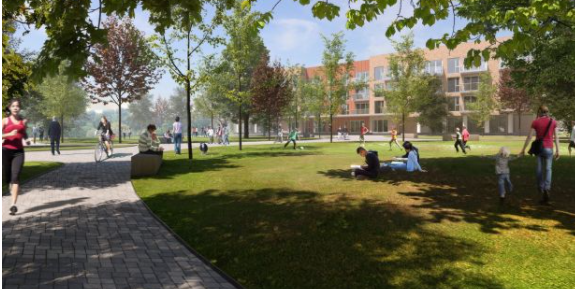 Nearly 1,000 homes are set to be built on the lands of the former Dundrum Central Mental Hospital.

The Land Development Agency announced its intentions to apply to An Bord Pleanala for a 10-year permission for a Strategic Housing Development on the grounds of the former hospital.

In current plans, the site is squarely placed in the immediate area of a number of proposed protected structures, namely the ‘Asylum’, the ‘Catholic Chapel’, and the ‘Hospital Building’.

With a total application site area of c.9.6 ha, the development will consist of 977 residential units – almost all apartments.

Current plans see all apartments having private balconies and terraces as well as a communal amenity open space provision – including courtyards and a roof garden.

Of the other homes envisioned, 20 two and three storey houses are in current provisions, consisting of seven three bedroom units and 13 four bedroom units.

The development will also consist of 3,889 sqm of non-residential uses with the change of use and renovation of the existing single storey Gate Lodge building to provide a café.

A restaurant, six retail units, a medical unit, a community centre and a childcare facility with an associated outdoor play area are also included in the application.

A demolition of a section of the porch and glazed screens at Gate Lodge building, the removal of walls adjacent to the Main Hospital Building and alterations and removal of sections of the wall to the Walled Garden are also included in current plans.

Provisions for public open spaces, cycle and pedestrian routes and parking are also accounted for.

Vehicles will be able to access the site from the existing access area off Dundrom Road and a new access area also off Dundrum Road to the south.