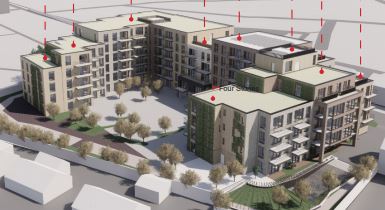 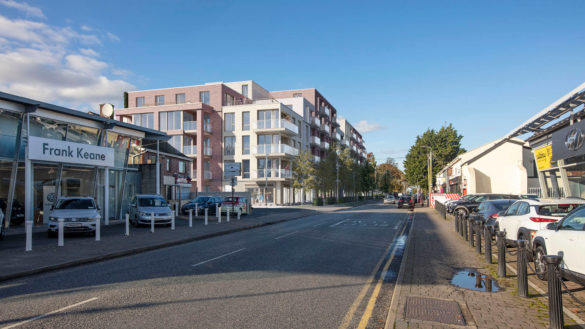 The construction of a huge, multi-million euro building providing over 150 apartments in the leafy Dublin suburbs of Deansgrange is now underway.

Lodged by developers under the Strategic Housing Development (SHD) act in June 2020 and was given the go-ahead by An Bord Pleanála (ABP) in October of that year, it has an estimated build value of €38m.

The site, located to the south of Deansgrange Cemetery, west of Foxrock Close and north of the Deansgrange Neighbourhood Centre, had encountered a number of refused planning permissions in the past.

With the onset of the new year, work officially commenced on January 4 – beginning with the demolition of all existing buildings on site.

In their wake, a mixed use building of four to six storeys over basement will be built.

The new construction will provide 151 new apartment units from ground level to the fifth floor.

The ground floor level will also offer a restaurant/café and five commercial units for the use of either office/professional services, a medical centre, a gym or another restaurant/café.

Current proposals will see the parking (including for motorcycles), bin storage and plant rooms at basement level.

Bicycle and designated car sharing parking spaces with a loading/set down area have been propositioned for the surface level.

Outdoor communal open spaces are planned for both the surface level and on the fifth floor.

For all elevated levels, balconies or terraces will be provided for the units.

To facilitate the development, boundary treatments and landscaping, an ESB sub-station, drainage and service works, the provision of a vehicular access and egress point,  pedestrian/emergency access point from Deansgrange Road and all other ancillary works will be undertaken.