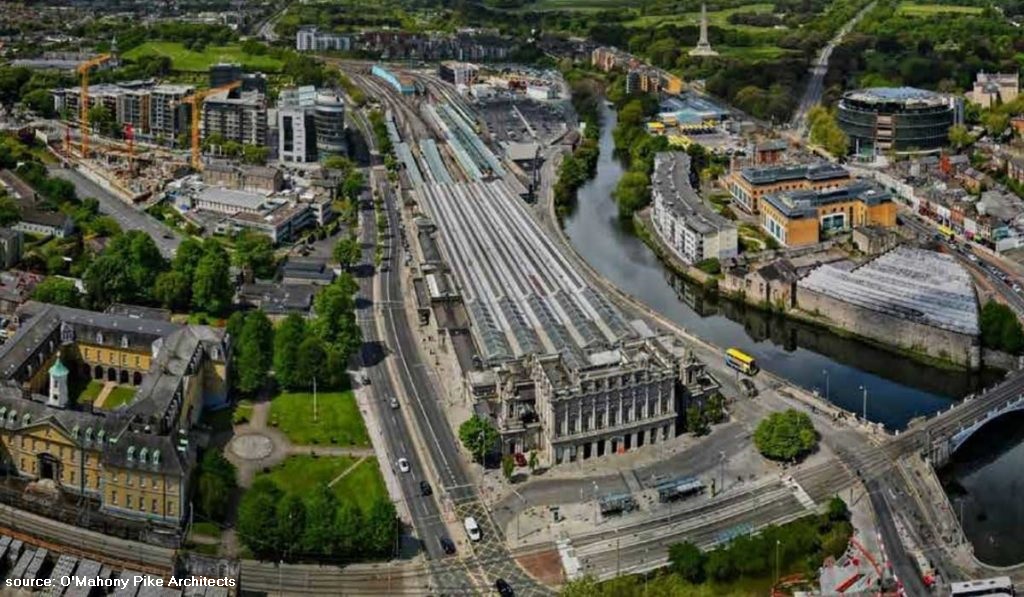 The Heuston Masterplan is set to completely transform the surrounding areas of Dublin’s Heuston Station into a sustainable, ‘car-free’ territory.

Launched by Córas Iompair Éireann’s (CIÉ) property division, the proposal will see the mass development of housing, commercial and retail space with direct local links to the many public transport systems available.

More than 1,000 residential units form part of the development on the 10-hectare site, alongside office space for over 8,000 employees and a 250-bed hotel.

In collaboration with partners O’Mahony Pike Architects, the Heuston Masterplan published last month will see the construction of two bridges for cyclists and pedestrians across the River Liffey.

The Conyngham Road Green Bridge will offer a link between Heuston Station all the way to the gates of Phoenix Park.

On top of that, the Phoenix Park tunnel will be extended to provide a second river crossing.

In an effort to encourage more active travel, the plan proposes 5,000 bike parking places around the area.

Existing car parking spaces at the station are also set to be gradually phased out. Drop-off areas and taxi ranks will remain in place.

Approximately one kilometre of river frontage will open up in order to interlink the green assets and public amenities of Phoenix Park and the Irish Museum of Modern Art (IMMA).

Previously announced in the Dart+ South West plans, a new train station is set to be developed at Heuston West.

The CIÉ also promised that ongoing transport operations and planned enhancements will be safeguarded.

Current plans see the office district located predominately in the eastern part of the land while residential areas will be situated between the new Dart station and the existing station.

Mixed-uses amenities will be positioned in proximity to key movements, such as arrival points around the site, ‘veneer’ frontages and at transport interchanges.

Although final costs for the ambitious project remain undetermined, gross development value currently estimates it in the ballpark of an eye-watering €1 billion.

Expected to proceed in phases, the plan will take around 15 years to complete.

While working with estate agents Lisney, CIÉ will seek a developer partner in the first half of 2022.

Current intentions see the planning application submitted in 2023 with construction to commence ‘as soon as possible’ after.