High inflation rates among other problems have hit the construction sector following the end of the COVID-19 slump, Building Information’s new index has found.

In the newly-published Building Information Index Q1-Q2 for 2022, significant pressures have been seen in the rising costs seen in the first six months of this year.

With the Society of Chartered Surveyors finding that construction price inflation is now running at 14%, Building Information Ireland CEO Danny O’Shea said this provided a backdrop to their half-year report of the industry.

“Covid restrictions appear to be well and truly behind us now, but challenges remain in terms of inflation, supply chain and labour skills,” he said.

Construction PMI in June and July suggest huge difficulties for the sector in the summer months.

However, the same report also sees inflation easing in the coming months.

“This should hopefully release some pressure on both suppliers and contractors in the  construction sector as we progress through the latter half of 2022.”

Commencement of projects has increased by just 65%, which is relatively static once inflation is stripped from the picture.

However, after two years of the sector largely coming to a stand still during rolling lockdowns, the industry has perked up with a substantial 50% national increase in application activity compared to the first half of 2021.

All regions of the island showed growth with Dublin seeing the largest at a 79% increase.

Connacht and Ulster remain largely unchanged with a marginal increase of just 1% – which is actually a decrease in projects once inflation is taken out of costs.

Although the rest of the country saw a decrease in granted permissions, they were up year-on-year nationally by 3% in thanks to Munster.

Despite a slight decrease in unit putput, the outlook for residential properties has remained positive with planning applications up 68% in the first six months of 2022 compared to 2021.

This increase is substantially driven by Strategic Housing Developments (SHD) and the new  new Large Residential Developments – all of which have units of 100 or more.

Dublin and Cork have seen the majority of new applications, showing gains of 94% and 95% in the Dublin and Munster regions respectively.

While granted applications increased by 5% nationally for the year, Munster has seen a significant rise in comparison to the rest of the country.

Commencements are up a marginal 2% in the same period.

Building Info’s analysis sees a possible 15% increase in activity in the short term with delays in planning and limitations of delivery hindering estimates.

Turning to the education sector, the outlook remains overwhelmingly positive with high levels of activity expected to continue into 2023.

Planning applications were down nationally by 30% but granted applications rose by 43%. All regions have felt this increase with the exception of Dublin which is down 17%.

When looking at agriculture, all metrics have seen significant decreases with planning applications down 56%.

Granted applications also fell by 43% for the year with all regions feeling this steep decline.

On the commencement front, the six months of 2022 saw a 17% national decline.

Inflation of steel prices has seemed to contribute to this downturn.

One consolation that can be taken for the sector is that turn around times have improved.

The industrial sector is continuing into 2022 with strong growth with planning applications up 15%.

Dublin benefited the most with a recorded 72% increase.

Although granted applications are down 19% nationally, commencements are up a significant 76%.

Strong activity is seen in Cork with Munster overall enjoying huge gains of 185%.

Turnaround times are just three weeks longer than the industry average at 66 weeks.

After taking a significant hit in the last two years, the commerical and retail sector has appeared to turn a corner in the first half of 2022.

Planning applications are up 27% compared to the same period in 2021.  While this growth was felt in Dublin and Munster, Leinster and Connacht Ulster continued to show decreases of 10% and 38% respectively.

While national commencement activity is down, a growth of 20% in Dublin is hoped to be reflected in the rest of the country in the near future.

In other sectors, medical construction looks neutral in the short term with current activity slowing slightly in 2022.

Meanwhile, activity and demand are both down significantly in the social sector when comparing the first halves of 2022 and 2021.

Information in the Building Information Index is gathered by measuring the actual (estimated) monetary build value of every construction project per sector. The data is taken by BuildingInfo from real time planning and project information.

Projects with a value of less than €200,000 were not included from this index, with the exception of the agriculture sector. 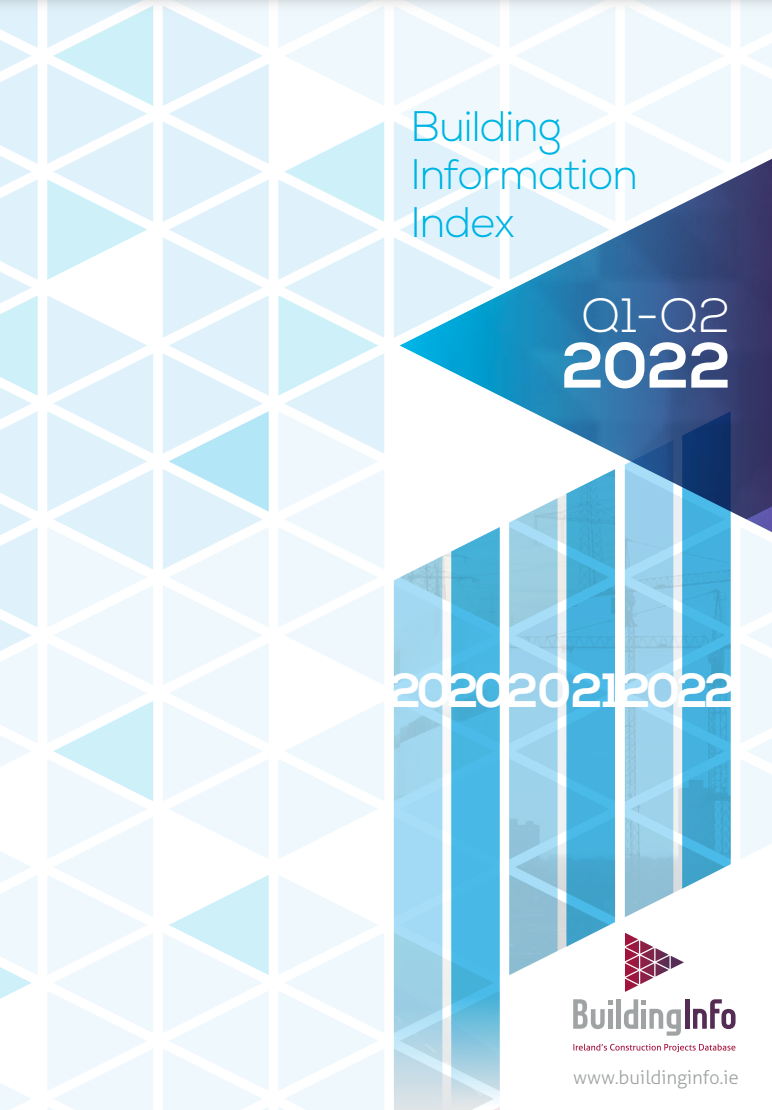